If you have seen the Star Wars saga you’re familiar with the scene of the Death Star firing its laser beam on planets to destroy them. But to those who have not, a concentric set of beams converge to fire a large beam upon a planet and destroy it...

If you have seen the Star Wars saga you’re familiar with the scene of the Death Star firing its laser beam on planets to destroy them. But to those who have not, a concentric set of beams converge to fire a large beam upon a planet and destroy it from the inside out. (Did you know that Dr. Mesiwala is a big Star Wars fan?) Coincidentally we use a similar process like that in Neurosurgery called Gamma Knife. While we are not fans of destroying planets, we use this technology to treat tumors, vascular malformations, and epilepsy.

Gamma Knife uses approximately 200 beams of high-dose radiation that are calibrated, extremely precisely, to a particular lesion in three dimensions. It is able to deliver this radiation with submillimeter precision ensuring that surrounding normal brain tissue is left unharmed. Essentially by delivering the radiation to the core of the lesion, it causes the lesion to collapse from the inside out. Gamma Knife can be used to treat several lesions including, but not limited to, aneurysms, AVMs (arterio-venous malformations), tumors (e.g. pituitary tumors), epilepsy, and trigeminal neuralgia. The limiting factor is size; Gamma Knife can only be used on lesions smaller than 3 cm (approximately). Multiple lesions can be treated at the same time, and the treatment can be delivered over several courses, but oftentimes just one!

Prior to the procedure itself, patients have undergone a careful selection and have met with a Radiation Oncologist. The Radiation Oncologist and Medical Physicist work together to calculate the radiation dose and trajectories. On the day of the procedure, your Neurosurgeon will apply a stereotactic headframe which is secured via four pins placed under local anesthesia. Calibration using MRI/CT/Angiography is completed for treatment planning. The patient is then brought into the suite and the machine essentially looks like an MRI machine where the gamma beams converge upon the lesion over the course of approximately 30 minutes. Meanwhile, the patient experiences zero pain during the procedure and are listening to music. Patients go home within a couple of hours of the procedure with little to no issues, minus the occasional headache from the pin placement, which is removed immediately after the procedure. 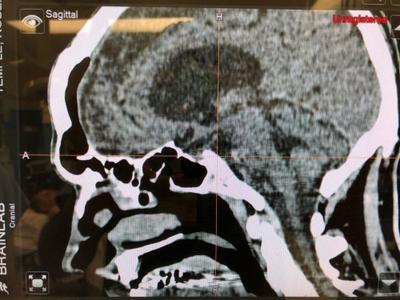 Dr. Mesiwala has been offering this as a treatment to his patients since he entered practice and regularly performs this procedure at just one of three Gamma Knife centers in Southern California. After “Gamma Knife mornings” he also attends Tumor Board with fellow Neurosurgeons, Radiation Oncologists, and Nurses to discuss cases, latest developments in treatments, etc. If you want to learn more about Gamma Knife or want to set up a consultation to find out if Gamma Knife is an option for you, visit www.drmesiwala.com. Dr. Mesiwala is happy to discuss the treatment options, as well as anything Star Wars-related with you!

May the force be with you!